KLM Royal Dutch Airlines is marking the 103rd anniversary of its founding on October 7 with the creation and presentation of a new Delftware miniature house that is a tiny replica of a Dutch building in one of the destinations where it flies. This charming tradition provides a new addition to the dozens of miniatures that have become niche collectibles for fans of air travel and the famous Dutch porcelain.
Haven’t heard of this? Don’t take my word for it – do an online search and you’ll see what a phenomenon KLM’s Delftware miniature houses are for collectors around the world.
Since the 1950s, KLM has been presenting Delftware miniature houses filled with Bols Dutch genever (the centuries-old Dutch forerunner of English gin) to its Business Class passengers on intercontinental flights. The miniatures are replicas of historic buildings in the Netherlands and abroad and have over the years become delightful and sought-after collectors' items. Since 1994, KLM has added a new miniature to its collection every year on the anniversary of the airline’s founding.
But in 2022, the replica of a traditional Dutch house in iconic blue and white china represents a very special location: the Dutch island of Aruba.
It's only the second time in KLM's history that a Delftware miniature is based on a building outside mainland Netherlands. On KLM's 85th anniversary, the airline presented a replica of the distinctive Penha Building in Curaçao. Along with Bonaire, Aruba, and Curaçao, make up the ‘ABC Islands,’ which are part of the Netherlands overseas.
This year's miniature Delftware house is a model of the Ecury family home in Oranjestad on Aruba. The Ecury House has been part of the National Archaeological Museum of Aruba since 2009 and forms the heart of the museum. It was built in 1929 and features a facade with classical elements, Caribbean gingerbread detailing and local decorative elements. This imposing and harmonious ensemble is a unique creation by the architect Dada Picus.
In addition, Aruba will be marking a centenary of aviation in 2023. The Ecury House is close to the site where the first aircraft landed, and furthermore, the Ecury family played a significant role in the development of aviation on the island.
KLM first flew to Aruba almost ninety years ago and made the island its operational hub for scheduled services across the Caribbean. 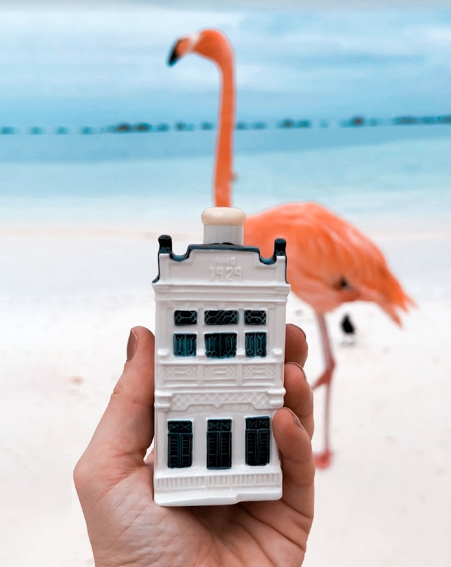 Centenary of Aviation on Aruba

2023 marks the 100th anniversary of the first flight’s arrival on Aruba. Since then, the airline industry has connected Aruba – also known as “One Happy Island” – with the rest of the world.
'I couldn’t imagine a better way to kick off next year’s anniversary, celebrating 100 years of aviation on Aruba, than with this gift from KLM; adding an Aruban house to their collection of Delftware miniatures,' said the CEO of Queen Beatrix International Airport Aruba. 'This miniature marks KLM's 103rd anniversary and is a great prelude to the centenary celebrations in 2023, which will involve the entire community. We are very proud that KLM has chosen the Ecury House, one of Aruba's most cherished heritage sites. It will add an Aruban flavour to KLM's collection of miniature houses, safeguard and promote the importance of our cultural heritage.”
“We are immensely proud that KLM has based its latest miniature house on a building on Aruba,' added the head of the Aruba Tourism Authority. 'Choosing the Ecury family home as the model for its Delftware miniature house spotlights our cultural heritage. We hope this will encourage travellers to come to Aruba and explore our unique Caribbean culture.”

Images courtesy KLM
All rights reserved. You are welcome to share this material from this page, but it may not be copied, re-published, broadcast, rewritten or redistributed.

Break away from the beach and inject the wonder of history into your next vacation! Mexico’s ancient past comes alive... learn more

Pretty in Pink: Where to Meet the National Bird of the Bahamas

The Caribbean flamingo is an iconic symbol of the tropics, with its vivid pink plumage standing out against a backdrop... learn more

Tropical, Travel-Inspired Cocktails to Ring in Your New Year

Mulled wine, snowballs, and spiked eggnog may headline the list of festive favorites for many cocktail drinkers, but why not... learn more